The Role the Pony Express Played in the Shipping Industry

How did we ship products without the internet? Before digital media did the work for us, we had to do the work ourselves, and this often involved using our equine companions to assist in our efforts. While we couldn't ship internationally with horses, we certainly made leaps and bounds forward with domestic shipping during the mid-1800's. One of the flagship transportation services, despite its short lifespan, became one of the most recognized mail delivery services in history.

Think back to the late 1850’s when the country was buzzing over the newly developed Pony Express. It required 157 stations across the country, and to be a delivery rider you couldn’t weigh over 125 pounds. This allowed the horses, often American-bred Quarter Horses to carry the combined weight of the rider and the mail without wearing down too quickly.

To decrease the fatigue associated with riding a horse for extended periods of time, mail carriers were taught to use their thighs to roll up and down on a horse’s back to the pattern of their trot, hence “posting” was invented. It is still used in several disciplines of horsemanship today.

It’s hard to imagine doing business without the ability to ship with the ease that we do now. Unlike the modern transportation methods of today, Pony Express riders needed frequent breaks and stops, slowing down their overall travel. However, that didn't stop the Express from making record time delivering mail.

The reason that the Pony Express became famous so quickly was because they claimed that they could get mail across the country in 10 days. In reality, this was only from Missouri to Sacramento.

One of the most notable moments in the history of the Pony Express is that it got news of President Lincoln’s inauguration from Nebraska to California in just 7 days.

In today’s world, we have multiple options that get parcels, letters, and documents from place to place quickly in a matter of days and sometimes, hours. Gone are the days where we need to put difficult, manual labor into riding across the country for two weeks to deliver a letter to a loved one.

How Did the Pony Express Work?

A carefully planned route across the US made the Pony Express possible. A rider would go station to station with mail, switching the horse out at each station so that a horse was never too tired to go on. These stations were never more than fifteen miles apart. In addition, riders would also switch every hundred miles or so.

Riders were paid a generous sum of $100 a month to deliver mail which was unheard of at the time, especially for young men. Late in 1860 at the height of the equine-powered delivery service, over 400 horses and 200 riders were part of the company. All riders were also required to carry a small Bible with them at all times, and had to take an oath that made them promise not to fight, curse, or drink on their journey.

To take a letter, the Pony Express originally charged a whopping five dollars. Before the company went bankrupt in 1861, that price had sunk to a single dollar a letter. The bags these letters were packed in are now actually sold as Pony Express Bags. 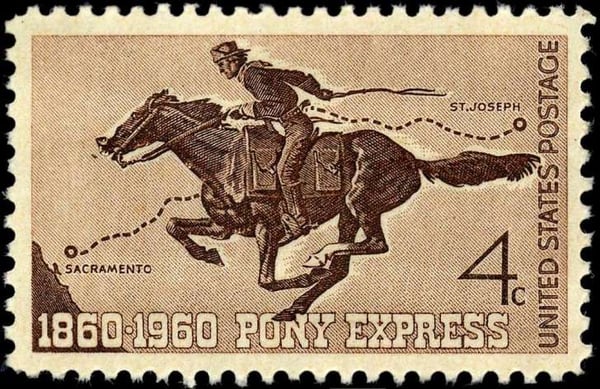 The Problems with the Pony Express

Not only was the journey tiring for the horses and the riders, but it was very dangerous. A rider and horse team encountered animals of all kinds, harsh weather conditions, and high tension situations because of the strained relationship between the United States Government and the Native Americans.

Many of the riders were very young men (the youngest being Charlie Miller, an eleven year old) so the lack of experience of an older and wiser rider sometimes led to tough situations. However, only one horse and rider was lost during the 16 months of operation.

The End of the Pony Express

Technology soon began to develop more rapidly. The Pony Express had hoped to receive a government contract for their mail route, however, Congress decided to subsidize the transcontinental telegraph line instead. This left the Pony Express bankrupt - they were losing upwards of $30 ($830 today) for every letter transported, and without government subsidies they were forced to close their doors.

Later, instead of funding The Pony Express, the government forced the founders to hand the western part of their established root to Wells Fargo.

The Pony Express was in operation for only 16 months due to the success of the transcontinental telegraph. The telegraph transmitted messages through electrical wires to various relay stations using Morse code.This was much faster than the Pony Express and led to the an increasing number of technological advancements such as the telephone, the fax machine, and eventually email and other various internet communication methods.

Shipping in the Modern Day

Now, due to a great number of resources at our disposal, we can ship products at the click of a button. We can communicate with each other instantaneously over email or telephone, we are able to prepare shipping labels online, and we can simply have a truck driver pick up a package at our door and give us a tracking number. With this number, we are able to see where the product is and when it will get to its destination - all while we sit at a computer desk. We've come a long way from the days of horse-powered mail delivery.

Things have changed and continue to change in the shipping industry, and time will tell what comes next.

The Pony Express Lives On Through the Re-Ride

If you want to send a letter through The Pony Express, the National Pony Express Association has an annual ride across the US from Sacramento to Missouri. Over 700 riders come together to travel the 1,966 mile Pony Express Trail in a meager ten days. For $10, you can send a personal letter to someone along the path anywhere in Missouri, Kansas, Nebraska, Wyoming, Utah, Nevada, or California.

Do you think The Pony Express was worth the cost? What do you like about it?

Need some advice on how to make sure a package survives a rough journey (even if it isn't by horseback)? Check out our packing guide download!

If we can't help you with it, we'll figure out who can! Stick around for lots of advice from the experts.